The School Run. How inappropriate is that phrase?! Nobody is on foot and nobody is going anywhere fast.

Almost a quarter of rush hour traffic consists of parents dropping off children at school. Most parents claim it is dangerous traffic conditions that prevent their going to school on foot or by bike. Going on foot or by bicycle is something the parents did when they were young. 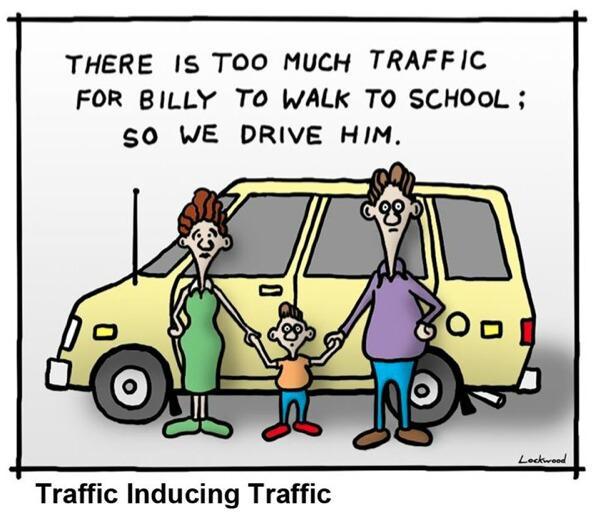 Sustrans run events at schools and claim a great increase in cycling and walking. They get a great response locally and highlight the alternative to the car for the school run. But. The Dutch would call this “een druppel op een gloeiende plaat”, a drop on a white hot griddle.

When parents are conditioned to think car equals safety and convenience no one is going to be persuaded otherwise. Many see driving a car as their right. (It isn’t; it is a privilege.) Some people won’t be persuaded however juicy the carrot.

Over breakfast, after yet another near miss the previous day, Olivia remarked how they should just close the streets to cars and HGV for 15 minutes to enable parents and children to walk and cycle to school.

The ink was barely dry on my blog about the school run in Finaghy and Edinburgh go and do this. At first the council only agreed a pilot at 5 schools, but parent pressure encouraged a bolder implementation at 11 schools. Some say it’s not bold enough.

School runs are typically short (less than 2 miles) and are much more efficiently covered by bicycle or on foot. If it becomes clear you can’t drop junior off at the school gate and have to walk the last 400 metres and back to your parked car you might as well walk all the way.

This can be done in Belfast. And should be done everywhere. The prize is a huge reduction in congestion and more children and parents being physically active on a daily basis. What’s not to like?

It will upset some people. A parent at my daughter’s school said I should “get a car”. Like everyone else. My guess is that she is in a minority, and most parents would gladly not sit in a traffic jam.

Olivia adds: when due to a recent fatal collision the Malone Road in Belfast was closed, traffic ground to a standstill across South Belfast. When no buses appeared, because they were stuck in traffic, hundreds of people walked down to the City Centre. Many walked three miles and more. And the weather wasn’t great.
It shows that people can be persuaded to walk (and walk great distances) if they are not given another option.

One thought on “Cycling to School 2”