A salmon is a fish commonly pictured leaping up waterfalls, swimming against the current. A salmon also refers to a cyclist going (legally) up a one way street, against the flow of traffic.

In Belfast a small number of one way streets are open to cycling in both directions.

Most famously, the Arthur Street bin lane has a 2 way track separate from the one way street. 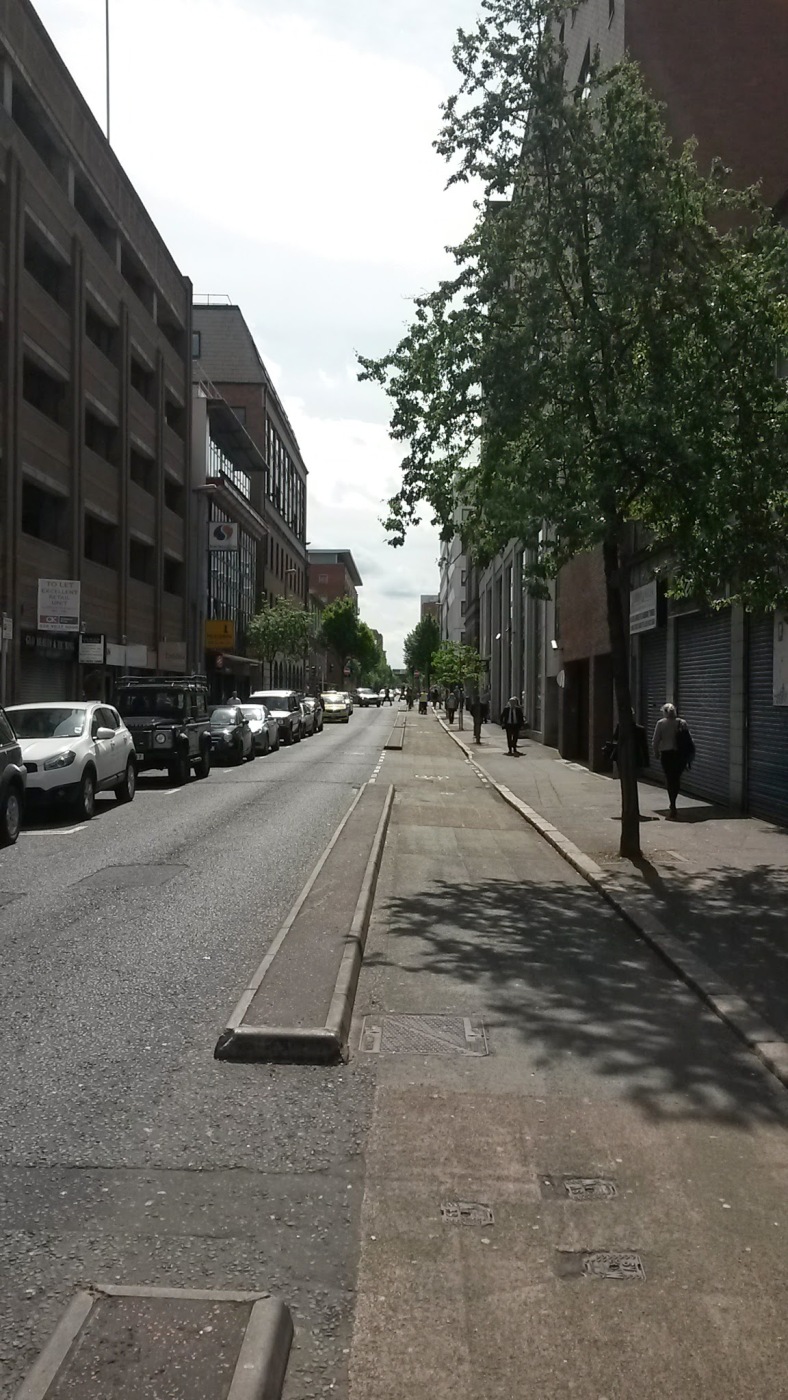 It has its problems, such as bins and the bits of shared space at each end where the lane crosses Chichester Street and May Street, but with some improvements this could be a very good bit of cycling infrastructure.

I am more concerned about this: 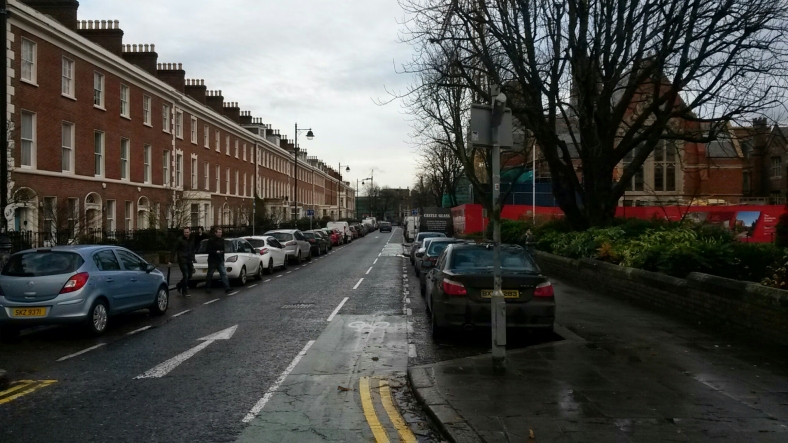 This is University Square in South Belfast, looking east. Some years ago DRD painted a bit of the road green, creating an advisory contraflow cycle lane.

It is cheap to implement: for the price of a few cans of green and white paint DRD can tick the “created cycling infrastructure” box in their annual management review.

It’s not very good though.

Photo 1: the parked car is blocking the lane and forces the cyclist out into the car space, against the flow of traffic.

Or you can easily imagine how a door suddenly flung open may cause a cyclist to swerve and become a KSI statistic.

Here, the cyclist must wait until the road is clear and then move out of the lane and move back in after the obstacle.

Consider this: the car occupant can safely swing open the door wide because the cycle lane acts as a buffer zone between parked cars and moving cars.

Now remind me, a cyclist is not equipped with crumple zones, so why are they made the soft padding between two steel objects?

Photo 2. The car space is not wide enough to allow a car to overtake a stationary vehicle without entering the cycle lane.

Would the driver of the dark vehicle have stopped if I had been closer? Experience tells me motorists think cyclists coming the other way are not traffic they have to give way to.

In this case the cyclist has right of way over the dark car, because the red stationary vehicle is on the other side of the road.

Get out of Jail

The Highway Code says vehicles may only drive or park in an advisory lane when it’s unavoidable. It’s a “Get Out of Jail Card”, one of many in the Highway Code.

To enter the parking spaces the cars must cross the lane, and that is against the rule, but it also unavoidable. So you’re allowed.

Across Belfast there are numerous  advisory cycle lanes and you’ll see cars parked in them quite legally, because it is unavoidable.

Consider this: the parking space is part of the same direction of flow as the one-way street and these two sandwich a cycle lane running the other way. It’s barmy.

Another example is found off Ormeau Avenue:

The solution in both cases is so simple it is a mystery why they didn’t get it right first time. Looking at the picture of Apsley Street above, the cycle lane goes to the left of the line of parked cars. The parked cars then act as a buffer between moving cars going one way and cyclists going the other way. Like this example in Dublin.

Oh, the glamour and excitement of it all. The Grande Partenza was in Belfast and despite the wet weather thousands of people cheered the riders on. It was very definitely the biggest sporting event the City has ever hosted.
Of course, there was talk of spin-off benefits for local cycling, but as the year comes to an end the Giro is a faint rosy glow, like the midday sun on a winter’s day.

The year started with a brutal killing. The Cyclesaurus, only a month before crowned worst infrastructure at the 2013 Fred Awards, was attacked by DRD assassins. When the dust cleared a new monster arose, with mutant offspring diagonally across the junction. At the 2014 Award ceremony the entire city’s cycling infrastructure received the dubious distinction of worst cycling infrastructure. It remains to be seen if DRD will tackle the whole city with such alacrity.

Just down the road, but a few decades behind

Belfast streets have some provision for cyclists; not 9 miles away Lisburn has no provision at all. The DSD’s masterplan only mentions cycling in relation to tourism. But where there is no provision the possibilities are endless.

Taking back the Square

In Belfast DSD have dreamt up plans for redevelopment of the area around Donegall Street and Shaftesbury Square. Cycling is not paid much attention, and especially the Shaftesbury Square plans need to be amended, as the square is to be included in the first phase of Belfast’s bike hire scheme as a location for 2 docking stations and is a vital link for cyclists travelling from the south to the City Centre and in the future from the Gasworks bridge towards Queen’s, City Hospital and the Royal Victoria Hospital and vice versa. 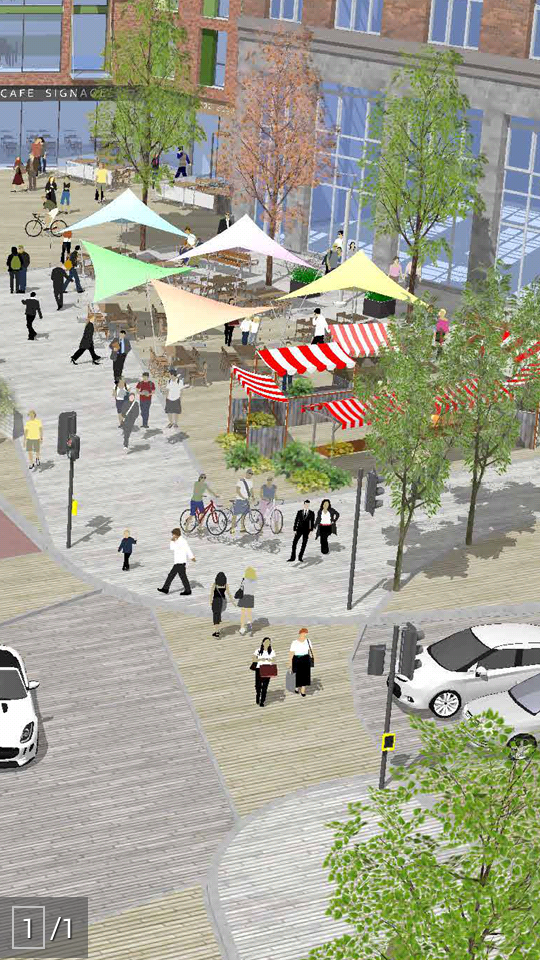 As a department DSD remain blind to cycling as a mode of transport and as a means to unlock our gridlocked roads. They could argue traffic isn’t their brief, but of course public realm is. Making our city’s spaces more liveable means making them pedestrian and bike friendly; making our city’s spaces a place to linger, rather than rush through by car.

Along the main thoroughfares of South Belfast the DRD dressed an attempt at traffic smoothing as a move to benefit local trade. The concept that parking is banned on one side of the road for 2 hours a day is too difficult to understand for motorists and too onerous to enforce by the parking attendants traffic wardens.

And does it work as a traffic smoothing measure? In October the Malone Road was closed during rush hour after a fatal hit-and-run RTC. Traffic ground to a standstill when parked cars on the Lisburn Road reduced the road’s capacity to take traffic from Malone Road. You’d think that DRD are giving up on these plans. No. At the time of writing the temporarily amended parking restrictions are still in force beyond the trial’s closing date.

Local politicians bent over backwards to accommodate the Giro, to the extent of a temporary ban along the route on election posters that disfigure our lampposts. Did they go the extra mile when NCN9 was closed for 2 years with only the scantest of notices given? No. Cyclists have to go the extra mile and cross the Lagan 3 times to access the City Centre from the south and south east of the city. It doesn’t bode well for the city’s bike hire scheme. 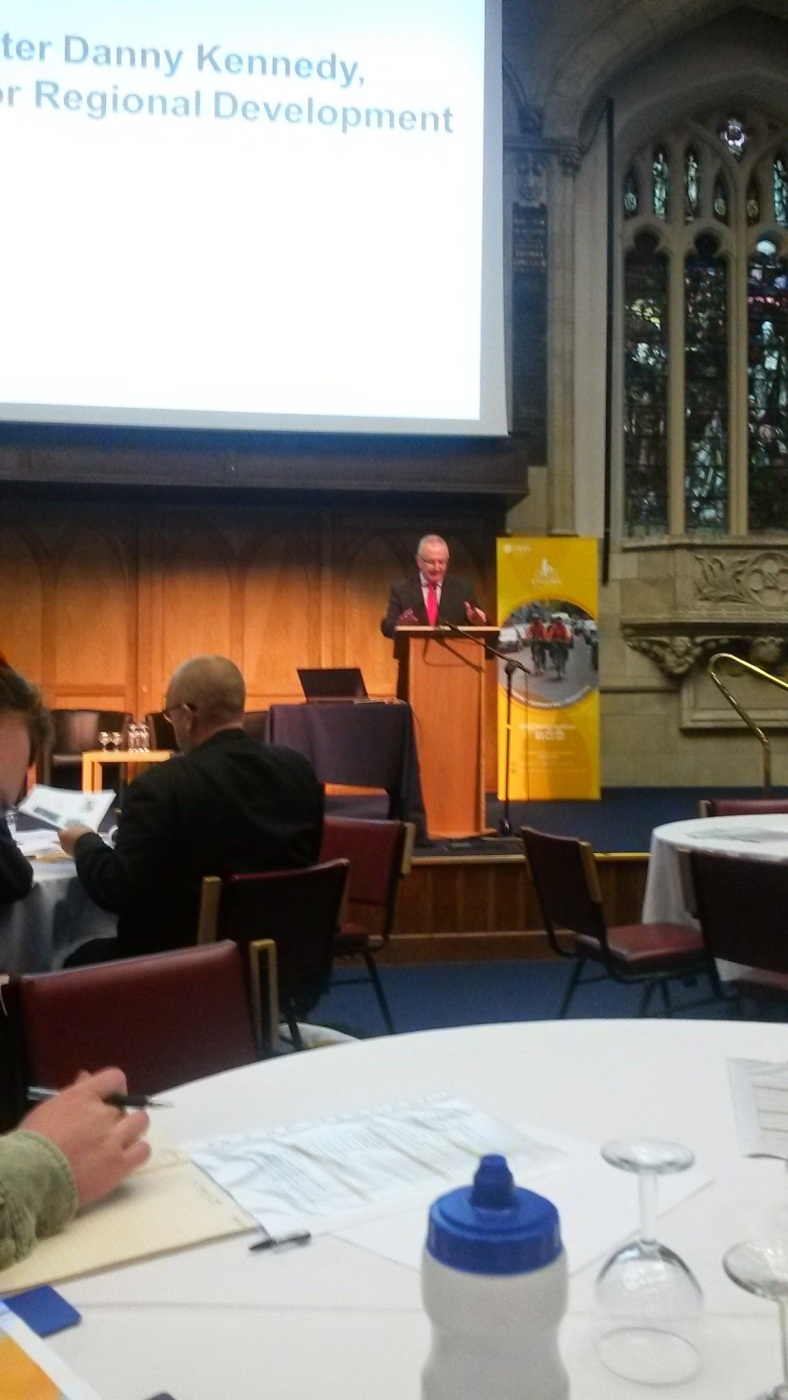 Danny Kennedy, the Minister for Cycling

At the DRD Changing Gear event in November it was pointed out that in New York their bike hire scheme followed from implementating an extensive cycling network. Belfast risks putting the cart before the horse by having a hire scheme up and running before there is any meaningful mesh of cycle tracks and lanes across the city. The move to make the City Centre a 20mph zone is the barest minimum. At least it will reduce the likelihood of a fatal consequence to an RTC involving a pedestrian or a cyclist.

It has been a dark year on our roads. The number of fatalities is well above that in previous years. In one day, Adam Gilmour, 8, was killed as he and his family were hit by a car on a 60mph rural road, just outside Cloughmills. Then, outside Hillsborough on the A1 a cyclist, John Flynn, 51, was hit by a lorry.

In the wake of the accident in Cloughmills arrangements have been made so Adam’s siblings are picked up by a school bus. However, the real issue of the high rate of fatal RTCs on rural roads, speeding, the lack of footpaths and cycle tracks remains unaddressed.

John Flynn’s death could have been prevented if during the most recent A1 upgrade cycling as transport was considered and given its own space. Now we have a cut-price motorway where cars travelling at a nominal 70mph limit mix with cyclists.

The Changing Gear conference was the high point of the DRD Cycling Unit’s year. It’s been a busy year for them, as they are given the brief of making Belfast the cycling capital of these islands and not much of a budget to make it so. At the Changing Gear conference it was made clear by all the speakers how far Belfast is from being a cycling capital.

The Cycling Unit released their draft Bicycle Strategy and drew criticism for their plans for a 2-speed network across the city. Apparently “fast commuter” cyclists’ cycle provision is different to that for inexperienced occasional cyclists. Who knew?

The plans for a multi-speed cycling network may not make it to the final document. Which is good news.

More good news comes from the DoE committee meeting up on the Hill. That department’s plans for a one-tier taxi licensing system in Northern Ireland are dead in the water. The minister was told that should he present the plans to the Assembly as they are now the 2 main parties promised to vote against. This means that Belfast’s bus lanes continue to be a relatively safe haven for cyclists.

But bus lanes are not safe enough! For 2015 cyclists should continue to apply pressure on our elected representatives and argue for a better deal for cyclists.

In a climate where every penny spent by Government is scrutinised it has to be pointed out that cycling delivers far greater returns for our economy and society than spending on car-centred roads. When we have little to spend, expensive white elephant schemes with dubious benefit to our economy such as the A5 dualling scheme and the Narrow Water Bridge should be ditched permanently in favour of making our city and town centres people-friendly again.

And that means stopping the tin avalanche and returning our streets to a human scale. And the new bike hire scheme can help towards that goal. 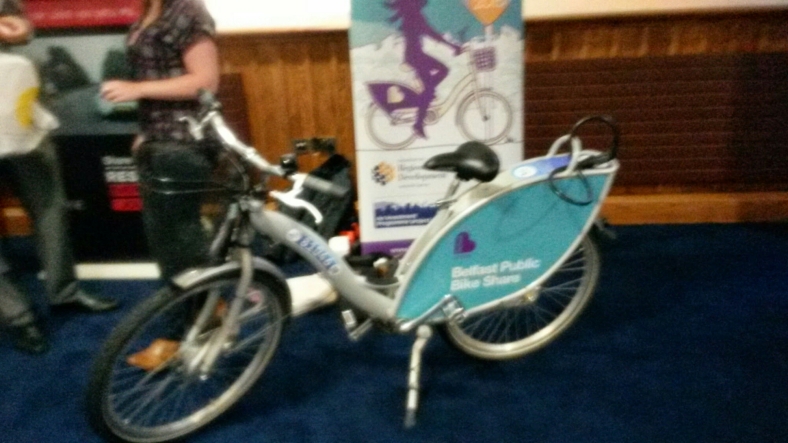 A Merry Christmas and a Prosperous 2015!

Yesterday, 9 December 2014, traffic in Belfast ground to a halt when a security alert in Lisburn closed the M1.
That was the second day of evening rush hour chaos.

Isn’t that cute? No?