I was forewarned. I follow a fair few Hackney cyclists on Twitter. They are an unhappy bunch. And with some justification too.

Since the start of 2015 Hackney has seen two cycling fatalities, both involving turning HGV. One cyclist, Akis Kollaros, was killed on Homerton High Street at its junction with Wardle Street. It’s in background of this picture (where the silver car emerges). 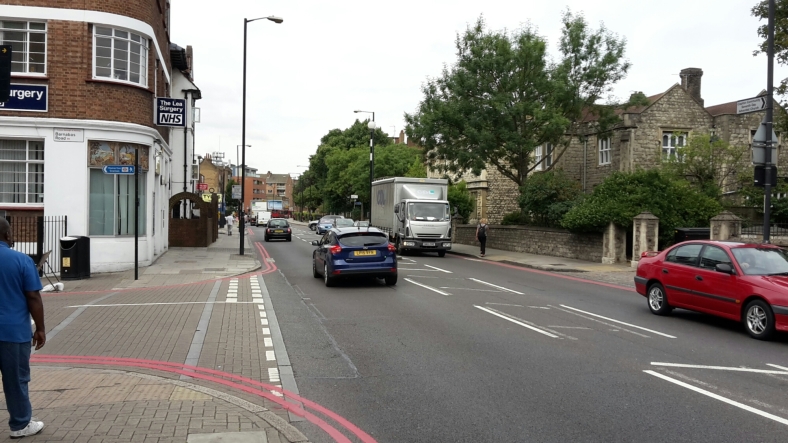 This is a fairly typical two way main road around Hackney. There is nothing to help cyclists cope with heavy traffic, including numerous large goods vehicles and buses.

Just a short distance away is this ridiculous bit of cycling infrastructure: 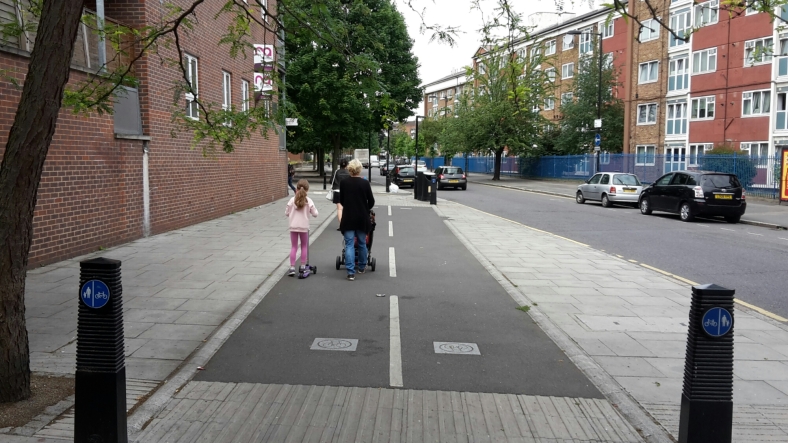 Wow. If only it ran for more than a few yards…

The Council want to rip it up and turn the adjacent one-way road (a notorious rat run) into a two-way. I’d like to rip up the lane too. But only to replace it with something better. Local campaigners have blogged about it so I’ll not repeat their excellent and professional analyses.

The one good thing this short stretch does is lead cyclists safely between two side streets that form a staggered junction with Wick Road. They form a good quiet North-South route from Homerton High Street past Homerton Station to Victoria Park. And the contraflow lane on Bradstock Road looks like this: 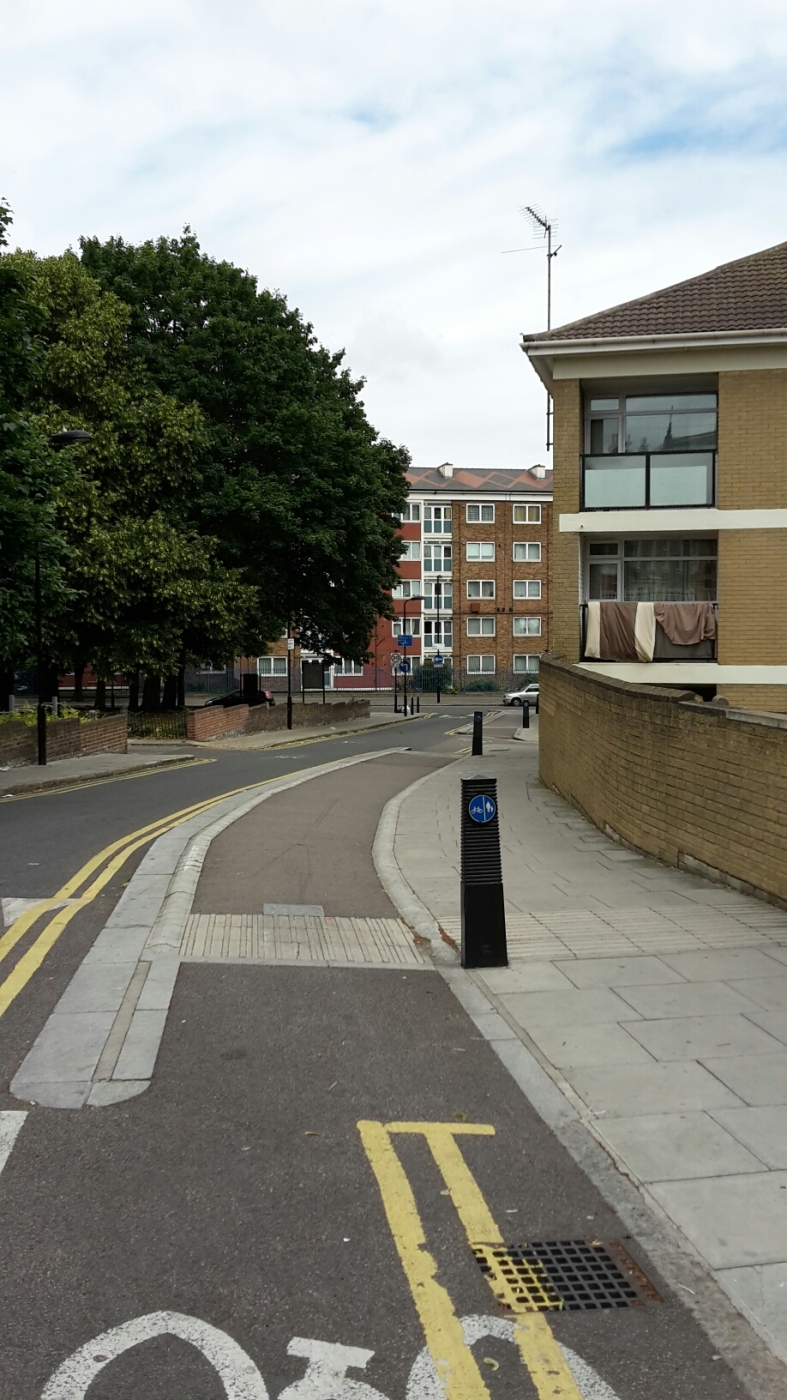 Yes, please can we have some of that in Belfast?

Elsewhere there are not so pretty contraflow door zone cycle motif monstrosities, such as this one in Hassett Street:

A pity that the photo of the van almost covering the painted cycle motif is more representative of Hackney than the nicely separated cycleway above.

If there is one thing Hackney consistently does well is the clever use of filtered permeability and one way streets, closing off roads for through traffic. In the Netherlands similar measures are used to make streets “autoluw”, where cars don’t impose.

What Hackney consistently does poorly is help cyclists at busy junctions and on major roads. The Council expect bicycle users to use the quiet back street routes, rather than form contiguous cycle tracks along main arterial routes like the A10 or A107. This subject has been covered before by Mark of ibikelondon. I have seen no evidence it has altered much since the post was written.

I watched with morbid fascination as an older cyclist slowly moved across two lanes of traffic on Mare Street at the Amhurst Road junction, indicating and gesticulating all the way, then go between two moving buses to turn right and continue up Mare Street.

The junction sits between the pedestrianised section of Mare Street (where cycling is allowed) and the Martello Street cycle and foot path.

Where the Martello Street path crosses Richmond Road it does so using a very Dutch feeling design. There are elephant footprints marking the cycle way across the road, adjacent to a zebra crossing. This is revolutionary stuff in the UK! My wife was not much impressed by my raving on about a crossing.

Google reveals it as an update on a previous design that did not include the pedestrian crossing.

Obviously cars must yield to pedestrians who start crossing. This is clear in the Highway Code. But will bicycle users starting to cross trigger the same response? It appears they do, though I’d counsel against riding across without checking both ways.

(I must qualify this by saying I passed it twice and twice cars stopped for bicycle users. This is obviously not representative.)

What my wandering around Hackney has revealed is a disjointed approach to cycling. Bicycle users are very welcome to use the quiet back streets and are helped with useful filtered permeability, signage and in some cases impressive cycling infrastructure.

However, on main roads bicycle users compete for space with heavy traffic. And this competition has seen two deaths since the beginning of the year.

Hackney does not seem to recognise that cyclists want to take the shortest, most direct route, pushing them instead onto back streets which don’t quite connect up to form a useful cycling network.

It is said you make up your mind about the success of a job applicant in the first few seconds of the interview. The job on offer is “Cycling Capital of these Islands”. Is Hackney a contender?

No, despite some very well executed ideas. A neighbouring London area, Waltham Forest, is planning a mini Holland which, on paper, looks very good. If they make it happen they could very well run off with that trophy.