I dedicate this post to David Catherwood, Stevie Lynch and Gavin Moore. I pray their deaths will not be in vain.

It is hard to find the right tone after the tragic events on 11 July 2017. Gavin Moore, a well-known member of North Down Cycling Club, died when a driver collided with him on the Ards to Bangor dual carriageway. My sympathies are with his partner and children.

At the same time I feel anger. Anger that in the space of one year three cyclists have died on North Down roads. Two on the A21, one on the A2. I’m angry that these deaths will soon be forgotten about by all but the immediate family.

It is for the authorities to establish how these three people died.

And in June 2017 a cyclist was injured on the A21 at the Newtownards Road roundabout on Bangor’s ring road.

2 deaths on the A21. And this cyclist survived a collision on the same road: https://t.co/V2FBxXimXe

What the these roads have in common is their near complete lack of designated cycle infrastructure.

The number of collisions involving cyclists across Bangor is sobering. Each dot represents someone whose trip out on a bicycle took an unexpected and unwelcome turn. Most, thankfully, resulted not much more than a grazed knee, or a broken bike, however for some that collision left them with life-long changes.

And perhaps in response the Department for Infrastructure built this: 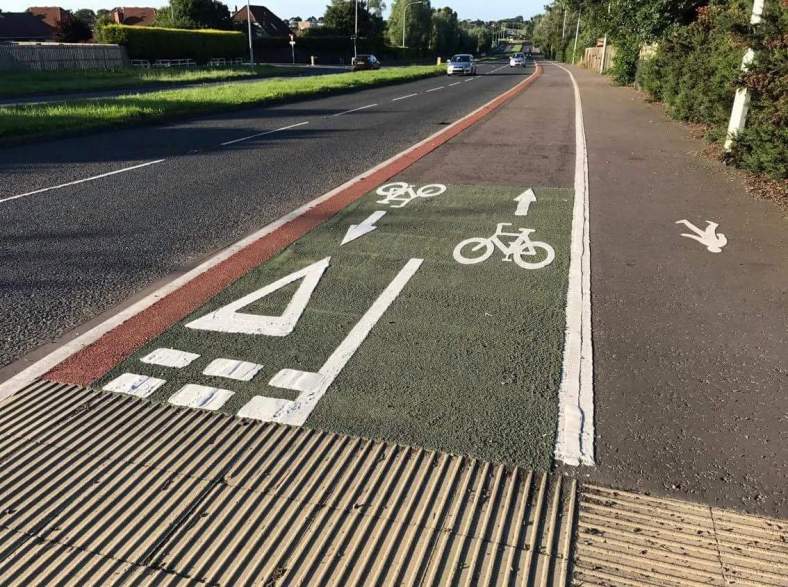 This kind of infrastructure is not going to enable 8 to 80 cycling, not even if the bicycle motifs and arrows are put the right way around.

It is totally unacceptable to have cyclists share road space with fast motor traffic travelling at 50 to 70mph. At these speeds an error by any road user can have serious consequences. At such speeds a collision with a pedestrian or cyclist will always result in death or serious injury. It is nothing short of a miracle that some walked away physically uninjured from the collision on Tuesday, 11 July.

(I will leave aside the A2 for this post. I hope to revisit it in the future.)

A Cycle Priority Street for Conlig

Before the A21 dual carriageway was completed in 1976 Bangor to Newtownards traffic went through Conlig village. The old road is still there as the Old Bangor Road and Main Street. It only gives access to the village. Conlig has 2 buses an hour in each direction.

Both motor vehicle access points from the bypass to Conlig have seen collisions with cyclists and are not safe. An alternative is needed.

The old road begins here and ends here, separated from the bypass by fences, but allowing pedestrian access in both cases. Widening access and building a short stretch of cycle path would allow cyclists access to the old road from the bypass.

The village main road currently has a 30mph speed limit, which is enforced by speed cushions. The presence of traffic calming suggests that speeding is an issue in the village. However, it is not a road with a high traffic volume.

The village environment can be improved and cyclists’ lives be saved by changing Main Street to a cycle priority street.

Here is a cycle priority route in Utrecht, NL:

Overtaking is discouraged by including a cobbled centre median, forcing motorists to slow to cycling pace. The road itself only gives access to adjacent properties and through traffic is routed elsewhere. And the area is a 30km/h (20mph) zone.

Another example is this “fietsstraat” in Lent, near Nijmegen, NL. It is also a bus route.

A Cycle Priority Street cannot live in isolation. It is pointless to protect cyclists and at each end throw them in front of cars as bumper fodder.

At the Bangor end a short bidirectional path would need to be be built to take cyclists to the cycle priority street beginning. But there is also the generously laid-out Rathgael Road and Newtownards Road roundabouts. Both need to have protection for cyclists added. This can be achieved within the footprint of the current roundabouts.

And in Newtownards at the Donaghadee Road roundabout a similar pattern emerges.

The A21’s generous lane widths, verges and median can be better used to provide designated cycle paths on either side of the road. The paths must be bidirectional to reduce the need for cyclists to cross the road. From Bangor the bidirectional path on the eastern side can be ended at the Green Road junction, allowing cycle access to the light industrial zone and government offices east of the A21. For onward travel the bicycle user can switch to the route through the village.

In Newtownards there is less space available, so a road diet of reducing the northbound from 2 to 1 running lane may be necessary to accommodate safe space for cycling.

At Conlig improvement can be made for the junction with Green Road. The best solution is to take pedestrians and cyclists over, or below, the main road into the village. The current arrangement of staggered pedestrian crossings and lights is not ideal. Until there is money found for a bridge or tunnel, the crossings will need to be adapted to allow bicycle users across the A21 and into Conlig village, via Green Lane.

3 fatal road traffic collisions involving cyclists, 2 at Conlig on the A21, should spur the authorities into action and make budget available to build infrastructure that will prevent more deaths in North Down.

A fitting farewell for Gavin https://t.co/ToTqW0ghIF