The path itself cannot be faulted. Using the railway infrastructure allows for a quick and cheap way to create a traffic free cycling route between places. Beeching, Benson and others blessed us with a wide network of potential Greenways. Like the former Sligo, Leitrim and North Counties Railway near Manorhamilton:

However. A big however. A railway is designed not to interact with local roads. It threads its way through the landscape separate from the grid of roads and streets. The landscape of Ireland is littered with arches and tunnels, taking railways over and under rivers, roads and hills. This creates separation between the Greenway and the land it passes through.

The consequence is that people will cycle the Greenway end to end, but not interact much with the area in between.

Mayo County Council has tried to overcome this by introducing short loops on local (restricted access) roads to encourage people to visit sights and places of interest within a short distance from the Greenway. These loops are signposted and well worth their while. The obvious jumping off point for these loops are former level crossings, or where farmers created access tracks to the fields using the old railway bed.

View from Rockfleet Castle, accessible from the Greenway using a signposted loop

Some of these loops cross the N59, or require people to walk or cycle a short distance along the 100km/h main road. A road with no pavement or cycle paths. The only safe way for us to cross was to put our 10 year old on the back and her bike on the front of my bike. Not everyone has the bike to do that. 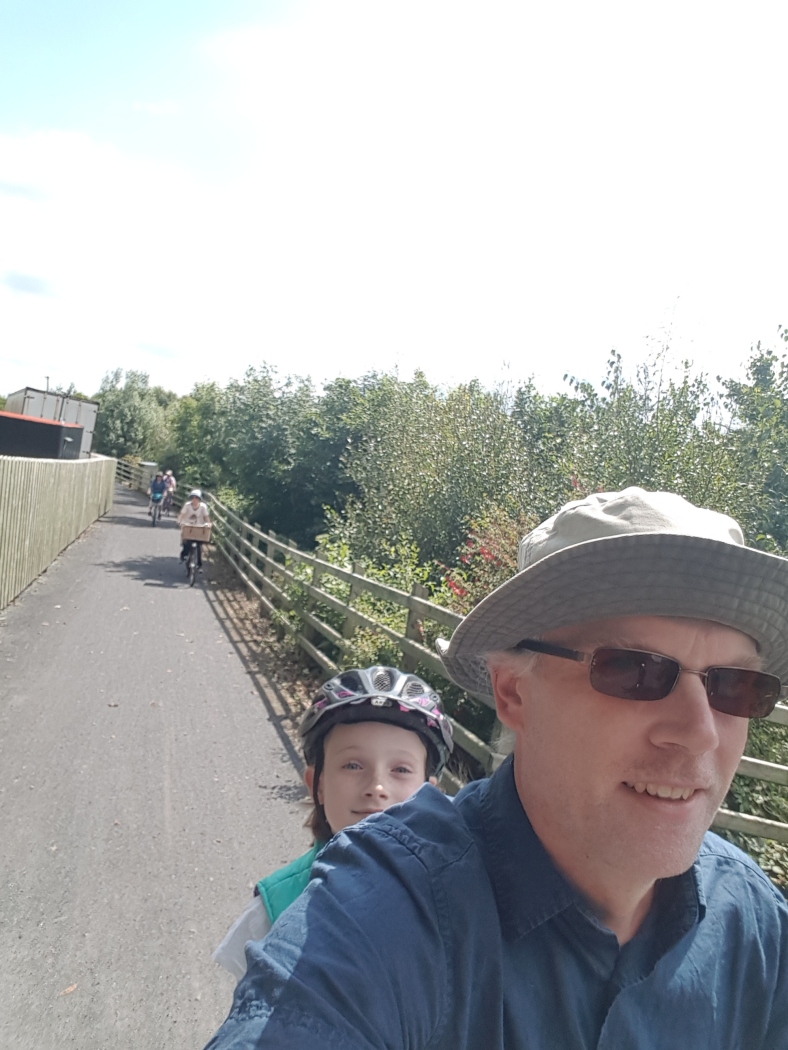 It is not sufficient to create a Greenway and not do anything about the main roads in the vicinity. These need to be designed so an 8 year old or and 80 year old can make it across safely.

On Twitter I have had an exchange with a Maghery resident about a proposal to put a walking and cycling bridge across the Bann near its mouth with Lough Neagh.

They fear that the building of a bridge will increase vandalism, spoil scenery and bring hordes of tourists to peek into their houses. So far so “Not in my back yard”.

Greenway planners need to get resident buy in by clearly setting out Greenway benefit to them. They need resident involvement in design process, and allow a meaningful consultation. Many development schemes get mired in reviews and court cases, resulting in delays, simply because the consultation process was not used to give local residents a proper voice.

Sometimes residents have a point about not wanting a Greenway on their land. At Derradda on the Newport to Mulranny section the Greenway takes an unexpected detour. It first veers off the embankment, then follows local access roads, returning to the original line via a newly built path.

The red line in the map above goes through a homeowner’s garden.

The homeowner’s objections can be understood. Not every one wants a public path yards from their property.

What it also shows is that for Greenway building authorities need not gain 100% landowner buy in. Adjacent roads can be used, if cyclists can be safely given space there. It also means a Greenway can be built, before all landowners are on board with the idea. Seeing it in practice, showing the economic potential realised, might persuade people to allow access at a later date.

In many cases local roads near the old railway line only serve to give access to properties and fields.

Realistically, roads will need to be used because the railway land was in many cases sold off. This is especially the case in towns.

The Midland and Great Western Railway ceased operations relatively recently. The last train trundled along the line in 1970. Just north of Newport town the railway was completely dismantled, and the N59 was partly realigned and is now where the railway was. At Burrishoole the present N59 bridges the sea inlet to the tidal Furnace Lough where the railway used to be. The old road now serves as the Greenway. 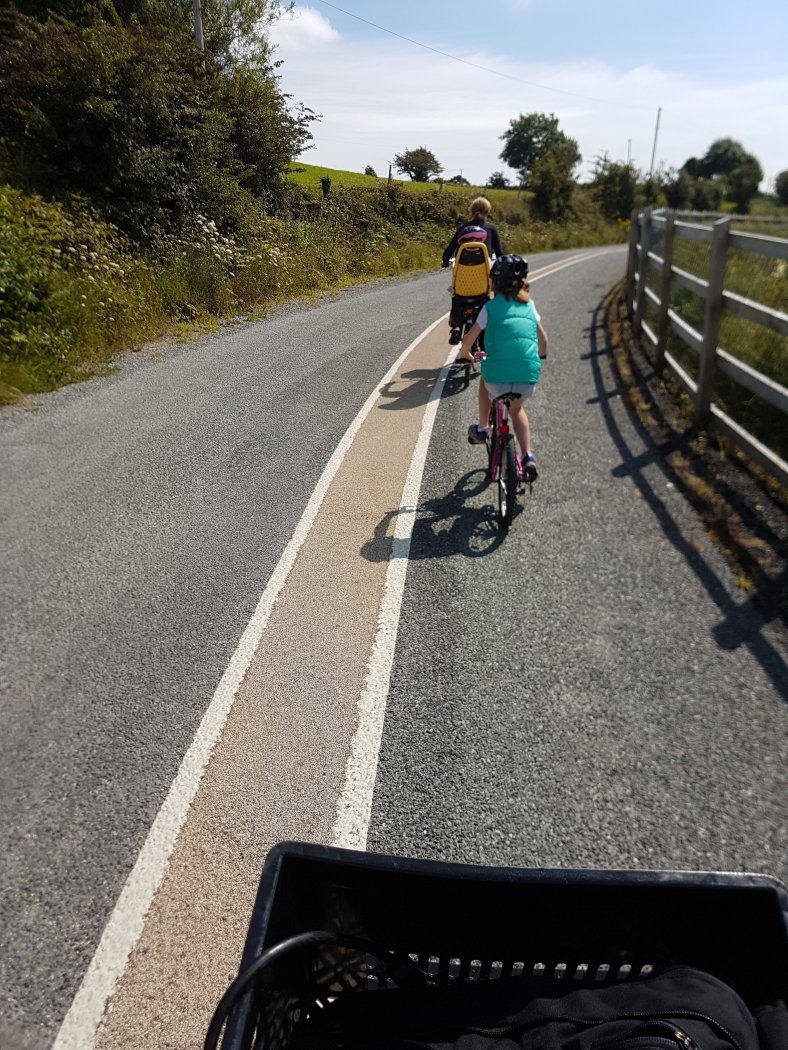 I’m not entirely persuaded that the strip of paint will keep my family safe from an errant driver on this 80km/h road.

On the edge of Newport the railway line crossed the Mulranny road.

Only the remnant of the arch stands today opposite Kelly’s car dealer’s. The railway line itself was built on. A small house stands where the platform of Newport station ended. The station’s goods store is a place of worship.

It is easy to miss the entrance to the Greenway, which is situated at the corner of a gravel layby. Homemade signs direct cyclists to the path. Despite this local initiative bicycle users can be seen riding the main road beyond. Mayo County Council could do more to make the path entrance more obvious. 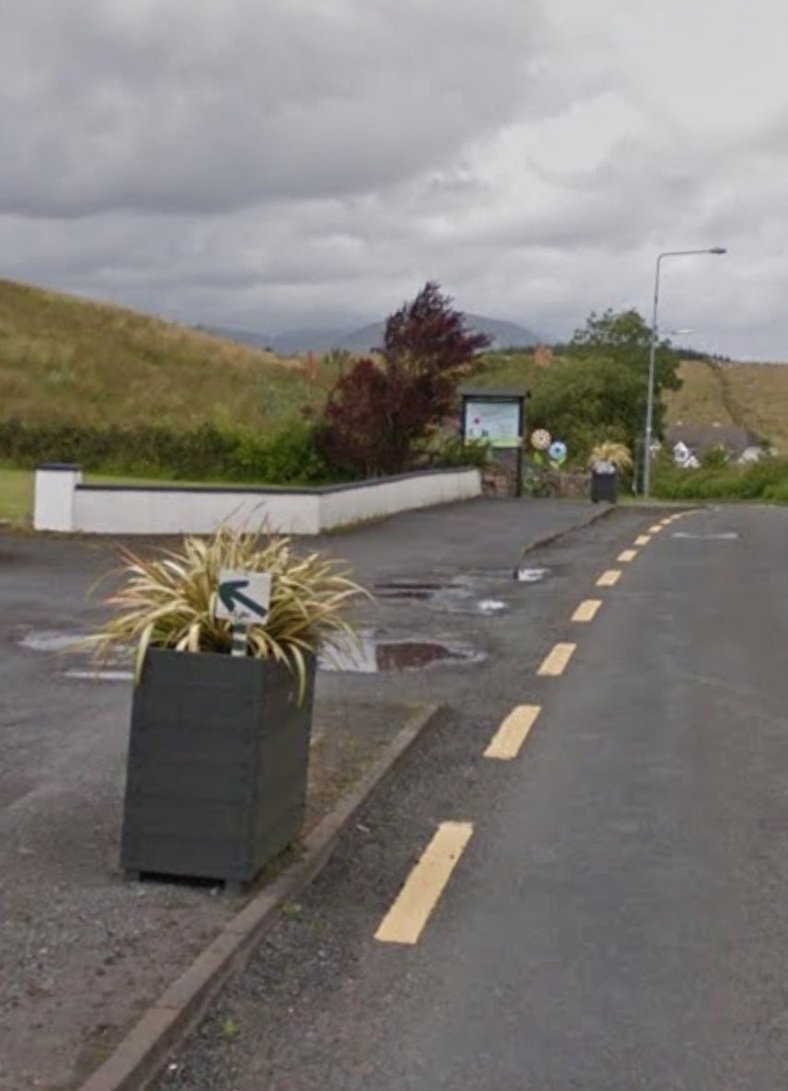 With the acres of tarmac available on either side of the Newport River bridge more can be done.

The old railway bridge is not easily accessible for cycling, with stepped access. An odd arrangement, because it is the obvious alternative crossing point to the road bridge a little further downstream.

The railway line used to go through two tunnels south of Newport. I guess it was too costly to restore these and run the Greenway through them.

One of two tunnels just south of Newport on the Midland Great Western Railway.https://t.co/WLtplToY56 pic.twitter.com/DTuObsjxG8

The Comber Greenway similarly ends at the edge of Comber town where the A22 has taken the place of the old Belfast & County Down Railway line. Cyclists have to use the Old Belfast Road and narrow, congested Castle Street and Mill Street to reach Comber town square.

A better solution in Comber is to route all motorised vehicles coming from Dundonald and the Glen Road (via Glen Link) down the A22 to the Killinchy Street roundabout. Make Railway Street one way Dundonald bound from Lime Grove to reduce rat-running. Block off the Old Belfast Road junction with the A22 and make the route from there to Comber town square a cycle priority street, banning access to motor vehicles at the A22 viaduct. 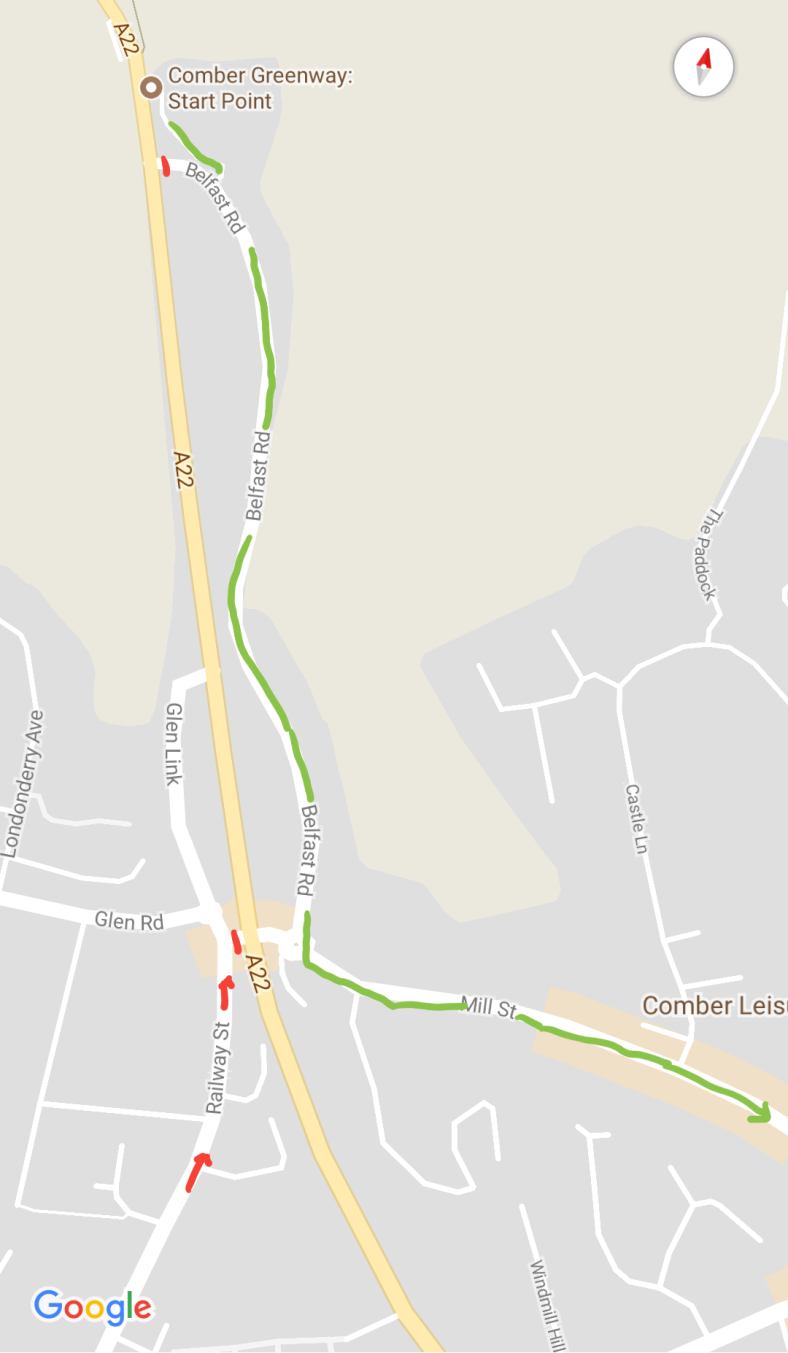 It is for the people and traders of Newport and Comber to decide whether to bring the Greenway and its many users into the town centre safely, or continue to live with streets completely dominated by motor vehicles.

Michelle McIlveen as Transport minister had great ambition for the Comber Greenway to be a Cycle Superhighway, but how can it be a fully developed transport link if cyclists are abandoned at the edge of town?

The Great Western Greenway is a good template for Greenways across Ireland. The benefits are clear, adding millions to the local economy. From Waterford to Sligo, Leitrim and North Counties old railways are being transformed.

More thought should be given to drawing the Greenway into town centres. Simply painting a line on a road and sticking a bicycle motif down will not do. Such as this example from Westport.

Poor cycle lane design, along the R335 in Westport

In Northern Ireland proposals and plans for hundreds of kilometres of Greenways are in development. The lack of an Executive should not hold up local planning and design proposals.

However, some day soon a Minister will have to allocate budget to these plans and allow these paths to be built.